Book Trailer: One Grave at a Time by Jeaniene Frost

Usually, I'm not a huge fan of book trailers. While I'm not a total book trailer hater, I have found that most trailers tend to be very poorly done and extremely tacky. However, I found this gem of a book trailer on Jeaniene Frost's blog this morning. Oh man you guys, it's a good one! It makes you want to squee with excitement and pull your hair out in frustration for having to wait another month for One Grave at a Time to come out. Make sure to watch it all the way through for some steamy Cat and Bones goodness!
Oh and click HERE to read the first three chapters of One Grave at a Time.
Posted by Nicole (Good Books, Good Coffee, Good Life) at 6:44 AM 0 comments

Bought Me a Kobo!

Sadly, my Sony Ereader decided to stop working this week, tear. No matter how long I plugged it in for, the battery would just not hold a charge. I'm still fuming mad because the stupid thing was so darn expensive. However, I have secretly coveted my friend's Kobo touch for awhile now and I thought that the passing of my Sony Ereader was the universe telling me that I must buy a Kobo for myself. So I did. And let me tell you, I loves it! Had to buy myself a lovely purple case for it too. 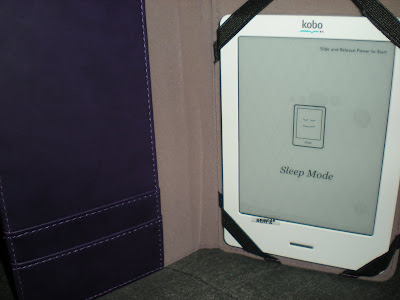 How cute is the little sleeping Kobo?
So what do you think? Did I make the right decision? Any of you Kobo owners have advice for me to keep my Kobo running smoothly?
Posted by Nicole (Good Books, Good Coffee, Good Life) at 8:33 PM 3 comments

Lara Kensington is living a perfectly mundane life as a museum curator, when bad boy treasure hunter, Reece Jerhico, leaps into her life.  Literally. Obviously distressed, Reece tells Lara that one year in the future she will be murdered. The evidence he uses to back up his  incredible story doesn’t convince Lara. She thinks he’s crazy. Especially after he claims to be her future fiancé. Lara would have remembered dating someone as delicious as Reece Jerhico. Hot as Reece is, Lara has a difficult time believing anything the man says until the broken amulet he wears around his neck  transports them into different bodies, during a different time, in a different place--an ancient place, a cold place, a place where Lara arrives naked, hysterical, and... Norse.
On the run  through time, attempting to escape a man who is hell-bent on Lara’s lack-of a-future becoming a reality, the couple must leap from one time and place to another just to stay alive. In the first volume of this sexy and humorous new series, Lara and Reece share an existence with a ruthless Viking and his captive bride and  then with a noble medieval knight and the feisty lady he  is determined to win.

Olivia Cunning is one of my favorite new authors. Her Sinners On Tour series is everything that a girl with a few rockstar fantasies could ask for. Therefore, when I read an article over at Shameless Romance in which Olivia Cunning talks about her new self-published novella, Loving on Borrowed Time, I first berated myself  for not being up-to-date on my Olivia Cunning news and then immediately bought the book so I can read it for myself.

What I found is that Loving on Borrowed Time is a fun and entertaining read that includes a few of Cunning's trademark smokin' hot love scenes. Although the love scenes aren't quite as provocative as the Sinners books, you will certainly need some type of fan or cool drink nearby when you read this book. Fans of Cunning will definitely not be disappointed. Also, the actual romance between the main characters Lara Kenningston and Reece Jericho is quite well done. Cunning truly has a talent for creating easy chemistry between characters. Reece and Lara also have some great banter that will keep you laughing and of course, there is lots of sexual tension between the pair. Although this book was a short read, I didn't feel their relationship was rushed even though Reece does make it his mission to make Lara fall in love with him again...or I guess for the first time.

The premise of the book itself is interesting and original, although it is complicated to understand at first. In the book, we learn that in the future, Reece and Lara fall in love and plan to marry. However, Lara is killed by a terrorist. Rather than living without her, Reece, who is an archaeologist, uses an ancient Egyptian amulet to travel back in time and save Lara from being killed. But one of Reece's colleagues, Carl, doesn't want Lara to live for reasons I'm still not 100% sure about. Things aren't exactly straight forward about how the amulet works, but basically when the wearer of the amulet is thrust back in time, they embody a particular person in the past. So when Reece grabs Lara and uses the amulet to escape before Carl stops him from saving Lara, they travel to the time of the Vikings and Reece becomes the leader of a Viking horde and Lara a saucy wench he captures. In their different roles, Reece and Lara must act out history and make sure the couple they embody have their HEA. All the while they are still on the run from Carl...

Still with me? Yeah, I got a little lost too. I think the book would have been better if there was more explanation about how the amulet works. I am still scratching my head about why Reece and Lara seem to travel in time randomly, yet Reece was able to pinpoint Lara in a museum a year before they met. Also, I would have appreciated more info about how Reece and Lara met before she was killed. Yes, we know they were in love and Reece had to win Lara over, but there isn't a lot of info about Reece and Lara's courtship and life before her death. Since Loving on Borrowed Time is the first book in Cunning's Lovers' Leap series, I'm hoping that we learn more about Reece and Lara's past (future?) relationship and the motivation behind creepy Carl wanting to apprehend the couple.

Although Loving on Borrowed Time  is a little complicated to understand at times, I still really enjoyed reading this novella. I applaud Ms. Cunning for expertly using her imagination to create something that is whimsical and fun to read. Reece and Lara are two great characters that have great chemistry. And the sex scenes in the book were top notch. Definitely what I would expect from the likes of Olivia Cunning. I hope more authors continue the trend of self-publishing.

Wow, I did not expect the cover for Lover Reborn to be released this early! But hey, I'm not complaining. However, I'm not thrilled with the orange and the guy on the cover is not how I pictured Tohr at all. I guess that sounds like complaining, doesn't it? I was hoping for someone more rugged. I think this would be better if there was less face and more chest/abs.
I have all my fingers and toes crossed that this book will live up to hype. Lover Unleashed was a huge disappointment for me. Why oh why does March 27th have to a be a gazillion days away?!?

Update: Word around the blogosphere is that this may not be the final cover for Lover Reborn but just a prototype. I'm hoping this is true because Tohr is just not an orange kind of guy.
Posted by Nicole (Good Books, Good Coffee, Good Life) at 6:06 PM 0 comments

Set your calendars! It looks like March 27, 2012 is going to be a GOOD day for us romance readers. Not only does J.R. Ward's Lover Reborn (Tohr's story) come out that day, but a few weeks ago, it was also announced that the 4th book in Stacia Kane's Downside Ghost series, Sacrificial Magic, is also set to release March 27, 2012. 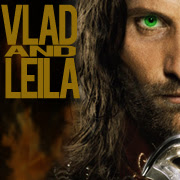 Now comes news that the first book in Jeaniene Frost's new Night Prince series featuring the much loved and swoon worthy Vlad is also hitting the shelves on March 27! As a history buff and a lover of vampire mythology, I am so excited to see how Frost will intertwine the history surrounding the real Vlad the Impaler with her fictional character that is hotter and more seductive than any other interpretation of Vlad/Dracula that I have read before.
Here is some more info about Frost's Night Prince series and the future of Cat and Bones that I snagged from her blog:
Okay, why “Night Prince”? For one, the word “Night” will – hopefully – let readers know at a glance that these stories are set in the same world as my Night Huntress series and Night Huntress World novels. Second, contrary to the most popular fictional rendering of Vlad the Impaler, he was not a Count. He was essentially a Prince of Wallachia during his reign (Wallachia now being part of modern-day Romania). So there you have the Prince part of the series title.
Tentative release date for the first book in the Night Prince series is spring 2012. It may be pushed back to summer if (a) I don’t write it fast enough, or (b) what I write needs a lot of revisions. So cross your fingers for me that I will write well, and quickly, lol. I haven’t seen the cover yet for the first book, but as Tom Egner has done such a fabulous job with all my other covers, I’m sure he’s cooking up something very cool.
Before anyone asks, no, this doesn’t mean Cat and Bones stories will be put on a long hold while I kickstart Vlad and Leila’s new series. First, still to come in 2011 for our mayhem-loving vampire couple is One Grave at a Time (August 30th) along with a special holiday novella that’s almost half the size of a regular book in The Bite Before Christmas anthology (October 25th). Vlad and Leila’s book will come, as stated, in early 2012, but then after that, we’ll be onto Cat and Bones #7 (still untitled, but expect the word “grave” in there somewhere).
Posted by Nicole (Good Books, Good Coffee, Good Life) at 9:07 AM 0 comments 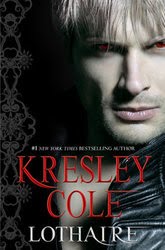 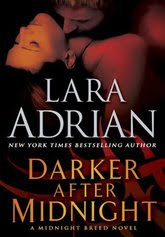 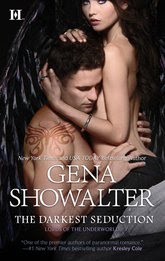 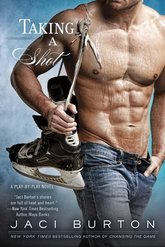 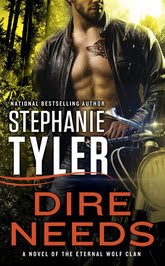 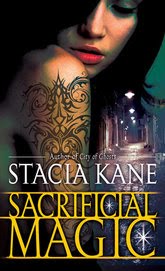 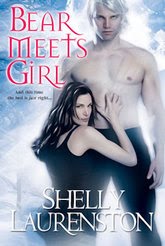 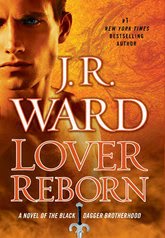 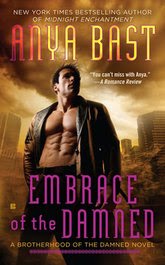 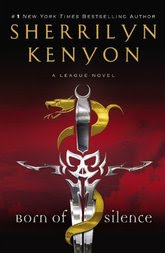 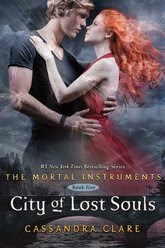 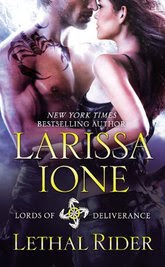 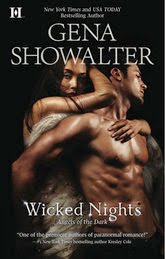 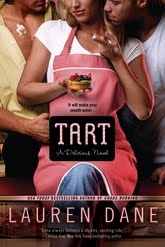 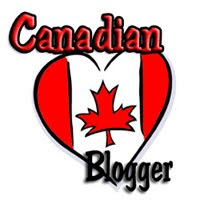